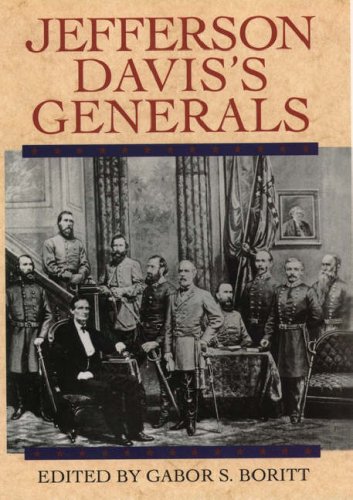 Confederate General P.G.T. Beauregard once wrote that "no people ever warred for independence with more relative advantages than the Confederates." If there was any doubt as to what Beauregard sought to imply, he later to chose to spelt it out: the failure of the Confederacy lay with the Confederate president Jefferson Davis.

In Jefferson Davis's Generals, a team of the nation's most distinguished Civil War historians present fascinating examinations of Jefferson Davis's relationships with five key generals who held independent commands: Joseph E. Johnston, Robert E. Lee, P.G.T. Beauregard, Braxton Bragg, and John Bell Hood. Craig Symonds examines the underlying implications of a withering trust between Johnston and his friend Jefferson Davis. And was there really harmony between Davis and Robert E. Lee? A tenuous harmony at best, according to Emory Thomas. Michael Parrish explores how Beauregard and Davis worked through a deep and mutual loathing, while Steven E. Woodworth and Herman Hattaway make contrasting evaluations of the competence of GeneraLs Braxton Bragg and John Bell Hood. Taking a different angle on Davis's ill-fated commanders, Lesley Gordon probes the private side of war through the roles of the generals' wives, and Harold Holzer investigates public perceptions of the Confederate Leadership through printed images created by artists of the day. Pulitzer Prize-winner James M. McPherson's final chapter ties the individual essays together and offers a new perspective on Confederate strategy as a whole.

Jefferson Davis's Generals provides stimulating new insights into one of the most vociferously debated topics in Civil War history.