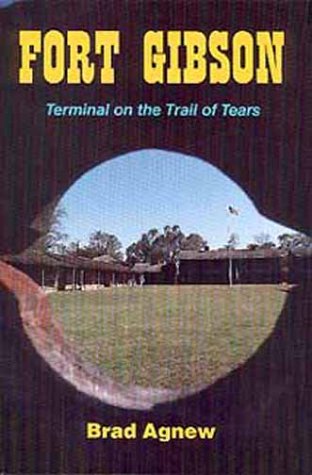 Fort Gibson: Terminal on the Trail of Tears

Established on Grand River in 1824, Fort Gibson was the first and perhaps the most important military outpost in the Indian Territory. The army's principal mission was to maintain order and expedite the policy of Indian Removal. Executing a policy many Indians bitterly opposed, the troops at Fort Gibson became the natural adversaries of tribes already residing in the territory. Conflict was anticipated, and war hysteria swept the region. Yet, during the emotionally charged years of Indian Removal there were no clashes between the Indians and soldiers from Fort Gibson.

Brad Agnew reveals that military policy at Fort Gibson was designed to ease the clash of cultures, and many of the officers and soldiers who served there were truly concerned about the welfare of American Indians. Agnew traces the relocation of the Eastern tribes to Indian Territory, and the resulting turbulence, through the letters, official reports, newspapers, and personal accounts of those who served at or lived near the post. Marked by no dramatic battles or massacres, the history of Fort Gibson recites repeated attempts to arrange truces between feuding tribes, to pressure Plains Indians to abandon their warlike ways, and to resolve intertribal conflicts. Although peace-keeping activities have received scant attention in Removal histories, efforts at Fort Gibson restrained the anger of fifty thousand immigrant Indians--preventing an uprising that could have set the frontier aflame.

Title:: Fort Gibson: Terminal on the Trail of Tears

Fort Gibson: Terminal on the Trail of Tears