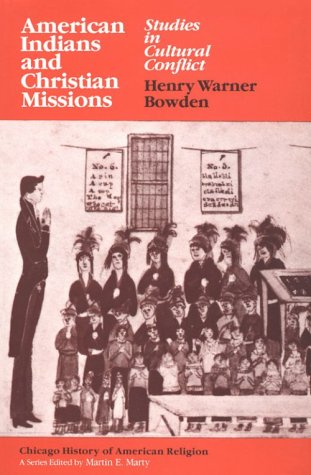 In this absorbing history, Henry Warner Bowden chronicles the encounters between native Americans and the evangelizing whites from the period of exploration and colonization to the present. He writes with a balanced perspective that pleads no special case for native separatism or Christian uniqueness. Ultimately, he broadens our understanding of both intercultural exchanges and the continuing strength of American Indian spirituality, expressed today in Christian forms as well as in revitalized folkways.

"Bowden makes a radical departure from the traditional approach. Drawing on the theories and findings of anthropologists, archaeologists, and historians, he presents Indian-missionary relations as a series of cultural encounters, the outcomes of which were determined by the content of native beliefs, the structure of native religious institutions, and external factors such as epidemic diseases and military conflicts, as well as by the missionaries' own resources and abilities. The result is a provocative, insightful historical essay that liberates a complex subject from the narrow perimeters of past discussions and accords it an appropriate richness and complexity. . . . For anyone with an interest in Indian-missionary relations, from the most casual to the most specialized, this book is the place to begin."-Neal Salisbury, Theology Today "If one wishes to read a concise, thought-provoking ethnohistory of Indian missions, 1540-1980, this is it. Henry Warner Bowden's history, perhaps for the first time, places the sweep of Christian evangelism fully in the context of vigorous, believable, native religions."-Robert H. Keller, Jr., American Historical Review