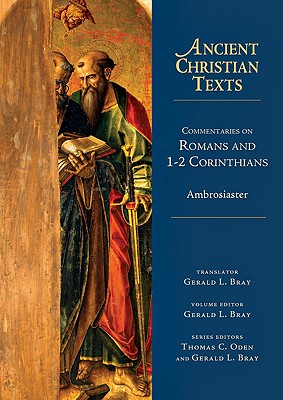 Readers who encountered snippets of Ambrosiaster in the Ancient Christian Commentary on Scripture series clamored to read the full translation of his fourth-century texts. The anonymous author (nicknamed Ambrosiaster because his works were formerly attributed to Ambrose of Milan) was likely a Roman priest who composed his verse-by-verse Pauline commentaries around 370. Translator Gerald Bray deserves applause for melding three disparate versions of the Latin text into a readable whole, resorting to footnotes sparingly and judiciously. In coming years, the ACCS editorial team plans to follow this inaugural effort with 13 volumes of biblical commentary from the patristic period, never before translated from Greek, Syriac, and Latin. Highlights of the new Ancient Christian Texts series will include Cyril of Alexandria's commentaries on John, Ephraim the Syrian on the Prophets, and John of Damascus on the Pauline epistles. 270 pp.

Ambrosiaster ("Star of Ambrose") is the name given to the anonymous author of the earliest complete Latin commentary on the thirteen epistles of Paul. The commentaries were thought to have been written by Ambrose throughout the Middle Ages, but their authorship was challenged by Erasmus, whose arguments have proved decisive. Here for the first time Ambrosiaster's commentaries on Romans and the Corinthian correspondence are made available in English translation, ably translated and edited by Gerald L. Bray. The commentaries, which serve as important witnesses to pre-Vulgate Latin versions of Paul's epistles, are noteworthy in other respects as well. Ambrosiaster was a careful and thoughtful interpreter, with little use for allegory, though he employed typology judiciously. Writing during the pontificate of Damasus (366-384), he is a witness to Nicene orthodoxy and frequently comments on themes related to the Trinity, the consubstantiality of the Son, the problem of the unbelief of the Jews and the nature of human sinfulness. He had a keen eye for moral issues and often offers comments that reflect his knowledge of how the church had changed from the time of the apostles to his own day. This commentary offers a rich repository of insight into the thinking of pre-Reformation church leaders for the leaders and teachers of the church today.