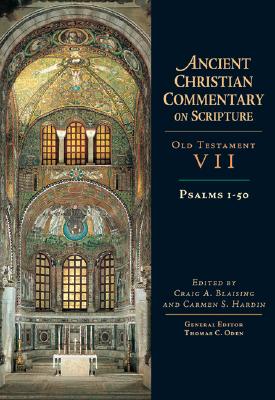 In the Ancient Christian Commentary on Scripture series, computer technology meets millennia-old pre-critical biblical exegesis, resulting in a welcome contribution to the understanding and interpretation of Holy Scripture. With the possibility of quickly searching the massive corpus of Greek, Latin, and Syriac patristic texts, a real advance is reflected in the pages of these commentaries for comparing and noticing consensus among the Fathers on issues of scriptural exegesis. The format is user-friendly: the English text of Scripture is followed by a selection of commentary drawn from writings of the Fathers, from Clement of Rome to John of Damascus. Contributors to the series from Protestant, Roman Catholic, and Orthodox biblical scholarship include Christopher Hall, Marcus Bockmuehl, Gerald Bray, George Dragas, Irina Levinskaya, Andrew Louth, Manlio Simonetti, and Benedicta Ward, to name just a few.

The Psalms have long served a vital role in the individual and corporate lives of Christians, expressing the full range of human emotions, including some that we are ashamed to admit. The Psalms reverberate with joy, groan in pain, whimper with sadness, grumble in disappointment and rage with anger. The church fathers employed the Psalms widely. In liturgy they used them both as hymns and as Scripture readings. Within them they found pointers to Jesus both as Son of God and as Messiah. They also employed the Psalms widely as support for other New Testament teachings, as counsel on morals and as forms for prayer. But the church fathers found more than pastoral insight in the Psalms. They found apologetic and doctrinal insight as well, as is attested by the more than sixty-five authors and more than 160 works excerpted in this commentary. Especially noteworthy among the Greek-speaking authors cited are Hippolytus, Origen, Eusebius of Caesarea, Athanasius, Basil of Caesarea, Gregory of Nyssa, Didymus the Blind, Evagrius of Pontus, Diodore of Tarsus, John Chrysostom, Asterius the Homilist, Theodore of Mopsuestia, Theodoret of Cyr, Cyril of Alexandria and Hesychius of Jerusalem. Among noteworthy Latin authors we find Hilary of Poitiers, Ambrose of Milan, Jerome, Augustine, Arnobius the Younger and Cassiodorus. Readers of these selections, some of which appear here for the first time in English, will glean from a rich treasury of deep devotion and profound theological reflection.