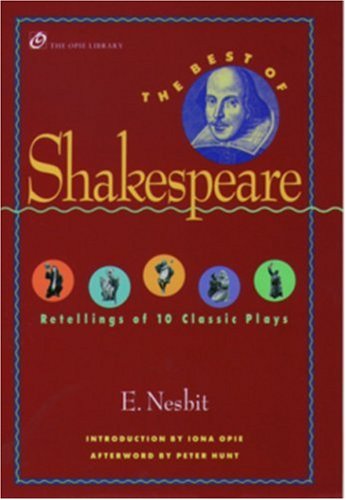 At the heart of any great work of literature is a story. William Shakespeare's plays are no exception. They tell the stories of kings and queens, of ghosts and witches, of romance and passion. But to get to the stories at the heart of the Bard's plays, the reader must first work through Shakespeare's language, a task often too demanding for younger readers (and for many adults). This new paperback edition brings ten of Shakespeare's greatest plays to life. E. Nesbit, the classic British children's author, shakes off the burdensome complexity of Shakespeare's language and tells the stories at the core of the plays with a generous sprinkle of wit and humor. Her graceful, vivid retellings, written in highly accessible and lucid prose, are the perfect introduction to Shakespeare's work.
All of these major works are included in this anthology: Romeo and Juliet, Hamlet, Macbeth, Othello, King Lear, The Merchant of Venice, The Tempest, As You Like It, The Winter's Tale, and Twelfth Night. The text is illustrated with dramatic black-and-white photographs from contemporary productions of the plays by the Royal Shakespeare Company, the Stratford Festival (Ontario, Canada), and the Folger Library's Shakespeare Theater. Also included is an afterword by Peter Hunt, a leading scholar of children's literature.
These retellings of the classic tales of one of the world's greatest playwrights remind us that it is never too early for Shakespeare.