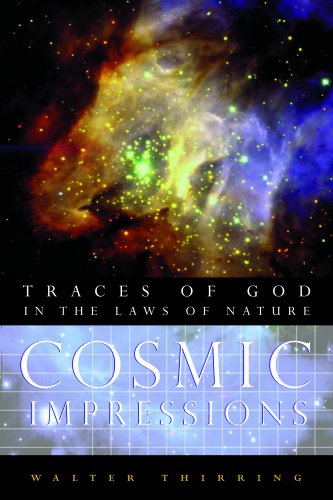 Cosmic Impressions: Traces of God in the Laws of Nature

Walter Thirring is an internationally renowned scientist who took part in and worked among those involved in many of the scientific developments of the twentieth century. His book, about the knowledge of the world as illuminated by twentieth century science, was originally published in German. This is the first English translation and is a book that is easily accessible to readers of popular science books and magazines.Professor Thirring starts with cosmology as he examines scientific questions and theories concerning the intricacy of nature and the universe. He branches into an exposition of chaos and its connection to the macroscopic world, as well as to life sciences, touching on such diverse related subjects as the structure of the water molecule. He speaks of advances with which he was personally involved, and offers priceless vignettes of great scientists with whom he exchanged discussions, including Albert Einstein, Werner Heisenberg, Erwin Schrodinger, and Wolfgang Pauli.His study of scientific theory and the intricacy of nature and the universe illuminates his argument for the role of a Creator. "Reflections on the creation of the universe lead to reflections about the creator," he writes. And arguing against atheism, he points out: "When we are moved by a fantastic building, a cathedral or a mosque and have finally realized what is behind the glorious proportions, who would then say, 'Now we don't need the architect anymore. There might not even be one, that could all just be the random product of circumstance.'"Furthermore, in making humankind special in his creation, the Creator gave us the responsibility of seeking an understanding of creation and protecting it.Tackling complex issues in science and religion, Professor Thirring presents a compelling argument for their synthesis. His tenure and influence in the scientific field make this argument even more compelling.

Title:: Cosmic Impressions: Traces of God in the Laws of Nature

Cosmic Impressions: Traces of God in the Laws of Nature