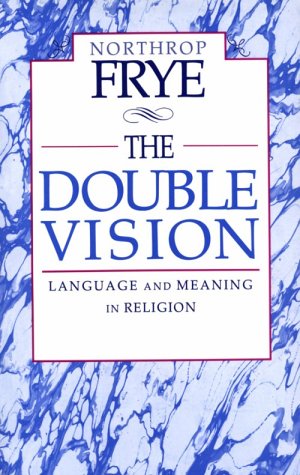 The Double Vision: Language and Meaning in Religion

The publication in 1982 of Northrop Frye's The Great Code: The Bible and Literature was a literary event of major significance. Frye took what he called 'a fresh and firsthand look' at the Bible and analysed it as a literary critic, exploring its relation to Western literature and its impact on the creative imagination. Through an examination of such key aspects of language as myth, metaphor, and rhetoric he conveyed to the reader the results of his own encounter with the Bible and his appreciation of its unified structure of narrative and imagery.

Shortly before his death in January 1991, Frye characterized The Double Vision as 'something of a shorter and more accessible version' of The Great Code and its sequel, Words with Power. In simpler context and briefer compass, it elucidates and expands on the ideas and concepts introduced in those books. The 'double vision' of the title is a phrase borrowed from William Blake indicating that mere simple sense perception is not enough for reliable interpretation of the meaning of the world. In Frye's words: 'the conscious subject is not really perceiving until it recognizes itself as part of what it perceives.'

In four very readable, engaging chapters, Frye contrasts the natural or physical vision of the world with the inward, spiritual one as each relates to language, space, time, history, and the concept of God. Throughout, he reiterates that the true literal sense of the Bible is metaphorical and that this conception of a metaphorical literal sense is not new, or even modern. He emphasizes the fact that the literary language of the Bible is not intended, like literature itself, simply to suspend judgement, but to convey a vision of spiritual life that contineus to transform and expand our own. Its myths become, as purely literary myths cannot, myths to live by. Its metaphors become, as purely literary metaphors cannot, metaphors to live in.

The Double Vision originated in lectures delivered at Emmanuel College in the University of Toronto, the texts of which were revised and augmented. It will appeal to scholars, students, and general readers alike who enjoyed Frye's earlier works or who are interested in the Bible, literature, literary theory and criticism, and religion.

Title:: The Double Vision: Language and Meaning in Religion

Publisher: University of Toronto Press: May 1991

The Double Vision: Language and Meaning in Religion