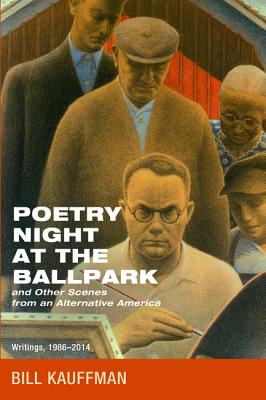 Poetry Night at the Ballpark and Other Scenes from an Alternative America: Writings, 1986-2014

Bill Kauffman has carved out an idiosyncratic identity quite unlike any other American writer. Praised by the likes of Gore Vidal, Benjamin Schwarz, and George McGovern, he has, with a distinctive and slashingly witty, learnedly allusive style, illumed forgotten corners of American history, articulated a defiant and passionate localism, and written with love and dark humor of his repatriation. Poetry Night at the Ballpark gathers the best of Bill Kauffman's essays and journalism in defense and explication of his alternative America--or Americas. Its discrete pieces are bound by a thematic unity and propulsive energy and are full of unexpected (yet startlingly apposite) connections and revelatory linkages. Whether he's writing about conservative Beats, backyard astronomers, pacifist West Pointers, or Middle America in the movies, Bill Kauffman will challenge, maybe even change, the way you look at American politics and the American provinces. About Bill Kauffman and his Writings: ""Inspiriting and restorative . . . "" --Edward Abbey, author of Desert Solitaire ""Kauffman and I are the original patriots. . . . Kauffman is a romantic reactionary, a writer with an odd, energetic optimism."" --Gore Vidal, author of Burr ""I've admired Bill Kauffman's books for years . . . appealing, elegantly written, and entirely American."" --Howard Frank Mosher, author of Northern Borders ""Bill Kauffman is a conservative of the highest order, unlike the false brand now conducting our political affairs."" --George McGovern+, 1972 Democratic candidate for President ""Kauffman thinks and feels as a man fully awake; he writes like a dream."" --Thomas Mallon, author of Watergate ""Generous in spirit . . . "" --Christopher Hitchens, author of Hitch 22 ""Bill Kauffman is one of America's funniest and wisest writers. Not only can he make anarchism seem lovable, he forces you to reassess everything you believe about American politics and culture. He might even make you change your life."" --Tom Bissell, author of The Father of All Things Bill Kauffman is the author of ten previous books, including Dispatches from the Muckdog Gazette, which won the 2003 national ""Sense of Place"" award from Writers & Books, and Look Homeward, America, which the American Library Association named one of the best books of 2006. He also wrote the screenplay for the feature film Copperhead (2013). Kauffman and his family live in his native Genesee County, New York.

Title:: Poetry Night at the Ballpark and Other Scenes from an Alternative America: Writings, 1986-2014

Poetry Night at the Ballpark and Other Scenes from an Alternative America: Writings, 1986-2014