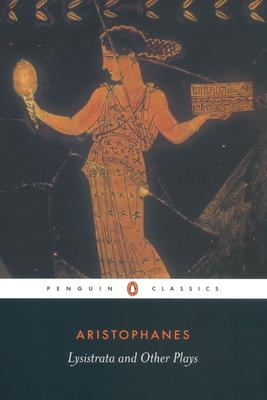 Lysistrata and Other Plays (Penguin Classics)

Writing at the time of political and social crisis in Athens, Aristophanes was an eloquent yet bawdy challenger to the demagogue and the sophist. The Achanians is a plea for peace set against the background of the long war with Sparta. In Lysistrata a band of women tap into the awesome power of sex in order to end a war. The darker comedy of The Clouds satirizes Athenian philosophers, Socrates in particular, and reflects the uncertainties of a generation in which all traditional religious and ethical beliefs were being challenged.

@PussyWhip What's something we can leverage against men? What's the one thing we're good for again? It's on the tip of my tongue.
From "Twitterature: The World's Greatest Books in Twenty Tweets or Less"

Lysistrata and Other Plays (Penguin Classics)