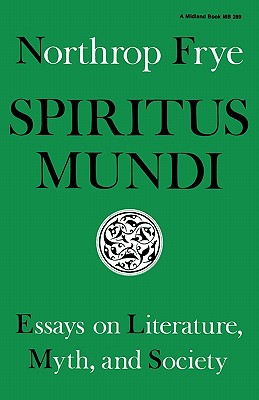 This collection of a dozen major essays written in recent year is vintage Frye--the fine distillation of a lifetime of originative thinking about literature and its context. The essays in Spiritus Mundi--the title comes from one of Yeat's best known poems, "The Second Coming," and refers to the book that was supposedly the source of Yeat's apocalyptic vision of a "great beast, slouching toward Bethlehem"--are arranges in three groups of four essays each. The first four are about the "contexts of literature," the second are about the "mythological universe," and the last are studies of four of the great visionary or myth-making poets who have been enduring sources of interest for Frye: Milton, Blake, Yeats, and Wallace Stevens.

The volume is full of agreeable surprises: a delightful piece on charms and riddles is followed by an illuminating essay on Shakespearean romance. Like most of the other essays in the book, these two are compressed and elegant expositions of ideas that in the hands of a lesser writer would have required a book. In another selection Frye rescues Spengler from neglect and argues for the inclusion of The Decline of the West among the major imaginative books produced by the Western world. Elsewhere he advances the case for placing Copernicus in a pantheon composed primarily of literary figures. OF particular interest are several essays in which Frye comments personally and reflectively on the influence he has had on the study of literature and the reactions elicited by his work. In "The Renaissance of Books" he dissents from the opinion of the McLuhanites that the written word is showing signs of obsolescence and argues that books are "the technological instrument that makes democracy possible."

As the dozen essays collected here amply attest, Northrop Frye continues to be the most perceptive and most persuasive exponent of the power of mythological imagination--or as he himself calls it, "the mythological habit of mind"--written in Engl