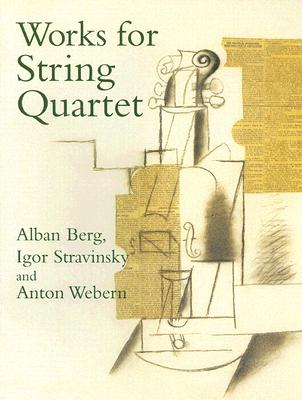 This impressive volume brings together three major 20th-century chamber works: Berg's String Quartet No. 1, Op. 3; Stravinsky's Three Pieces for String Quartet; and Webern's Five Movements for String Quartet.
Heavily influenced by the works of Arnold Schoenberg, Alban Berg's String Quartet No. 1 brought its composer into the musical vanguard. Schoenberg declared himself astonished by the "fullness and unconstraint of its musical language, the strength and sureness of its presentation, its careful working and significant originality."
Stravinsky recognized his Three Pieces for String Quartet as marking an important change in his art, and this turning point can be regarded as an experiment in new stylistic possibilities. The first piece features a mechanical repetition of a musical figure; the second is highly atonal; and the final piece introduces the austere style to which the composer later returned.
Like Berg, Webern was a student of Schoenberg, and the Five Movements for String Quartet both reflects the master's teachings and extends beyond them. Departing from traditional thematic composition and form, these gemlike miniatures anticipate the development of the twelve-tone method.