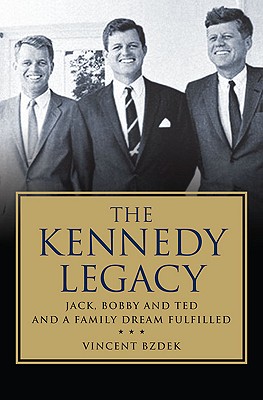 The Kennedy Legacy: Jack, Bobby and Ted and a Family Dream Fulfilled

John, Robert, and Ted Kennedy's individual stories can be seen as essentially one, each successive brother striving to fulfill the interrupted promise of the brother before. The closing of Ted Kennedy's chapter in America's political and cultural life means that, for the first time perhaps, the real measure of the Kennedy legacy can finally be taken. This is a story of a brotherhood in three acts: Act I is John F. Kennedy's presidency, as seen from Ted's front-row seat. Act II is Robert Kennedy's five brief years as the family standard bearer, including his tenure in the Senate with his brother Ted and the memorable 82-day presidential campaign that redefined the Kennedy legacy. Act III is Ted's 40-plus years in the Senate as keeper of the flame.

How did the brothers pass the torch to each other? What have the three brothers left us collectively? And who carries the torch forward now? The Kennedy Legacy compellingly answers these questions and much more.

Title:: The Kennedy Legacy: Jack, Bobby and Ted and a Family Dream Fulfilled

The Kennedy Legacy: Jack, Bobby and Ted and a Family Dream Fulfilled