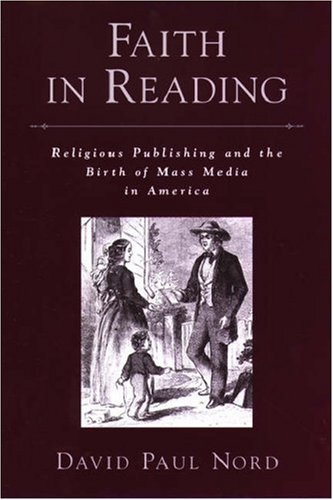 Faith in Reading: Religious Publishing and the Birth of Mass Media in America (Religion in America)

In the twenty-first century, mass media corporations are often seen as profit-hungry money machines. It was a different world in the early days of mass communication in America. Faith in Reading tells the remarkable story of the noncommercial religious origins of our modern media culture. In the early nineteenth century, a few visionary entrepreneurs decided the time was right to reach everyone in America through the medium of print. Though they were modern businessmen, their publishing enterprises were not commercial businesses but nonprofit societies committed to the publication of traditional religious texts. Drawing on organizational reports and archival sources, David Paul Nord shows how the managers of Bible and religious tract societies made themselves into large-scale manufacturers and distributors of print. These organizations believed it was possible to place the same printed message into the hands of every man, woman, and child in America. Employing modern printing technologies and business methods, they were remarkably successful, churning out millions of Bibles, tracts, religious books, and periodicals. They mounted massive campaigns to make books cheap and plentiful by turning them into modern, mass-produced consumer goods. Nord demonstrates how religious publishers learned to work against the flow of ordinary commerce. They believed that reading was too important to be left to the "market revolution," so they turned the market on its head, seeking to deliver their product to everyone, regardless of ability or even desire to buy. Wedding modern technology and national organization to a traditional faith in reading, these publishing societies imagined and then invented mass media in America.

Title:: Faith in Reading: Religious Publishing and the Birth of Mass Media in America (Religion in America)

Faith in Reading: Religious Publishing and the Birth of Mass Media in America (Religion in America)