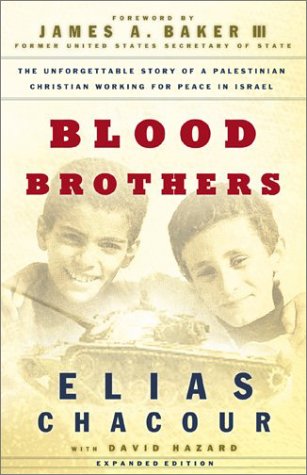 As a child, Elias Chacour lived in a small Palestinian village in Galilee. The townspeople were proud of their ancient Christian heritage and lived at peace with their Jewish neighbors. But early in 1947, their idyllic lifestyle was swept away as tens of thousands of Palestinians were killed and nearly one million forced into refugee camps.
An exile in his native land, Elias began a years-long struggle with his love for the Jewish people and the world's misunderstanding of his own people, the Palestinians. How was he to respond? He found his answer in the simple, haunting words of the Man of Galilee: "Blessed are the peacemakers."
In Blood Brothers, Chacour blends his riveting life story with historical research to reveal a little-known side of the Arab-Israeli conflict and the birth of modern Israel. He touches on controversial questions such as "What behind-the-scenes politics touched off the turmoil in the Middle East?," "What does Bible prophecy really have to say?," and "Can bitter enemies ever be reconciled?"
Originally published by Chosen Books in 1984 and now expanded with a new introduction by the author, a new foreword by former Secretary of State James A. Baker III, and a "Since Then" epilogue by writer David Hazard, this compelling book offers readers hope-filled insight into living at peace in the most volatile region of the world.