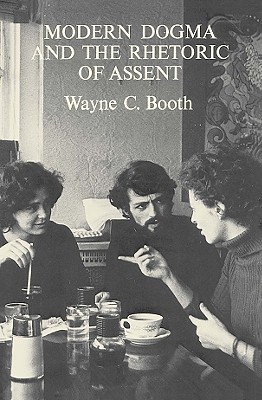 Modern Dogma and the Rhetoric of Assent (Ward-Phillips Lectures in English Language and Literature ; V. 5)

Concerned with his students' general inability to get themselves ''heard'' or intelligibly understood, long-time literature professor Wayne Booth reached beyond his initial assumptions of slovenliness and ineptitude to unearth a deeper failure, sprouting from modernist dogmas concerning belief and doubt. Good rhetoric is more than simply effective rhetoric, ''successful in the sense of winning assent regardless of whether assent is justified.'' Divorced from the truth (we're paraphrasing here), such rhetoric is bunk. What Booth's after is the ''art of good reasons'' -- discovering what authentically warrants assent. Taking cues from philosopher of science Michael Polanyi and Aristotelian scholar Richard McKeon (as well as John Henry Newman, Kenneth Burke and Carl Jung), Booth first exposes modernist assumptions such as ''you cannot reason about values'' and ''the job of thought is to doubt whatever can be doubted,'' then suggests a rhetoric of ''systematic assent'' anchored in ''the great reservoir'' of the good. He explores art and literature's ability to teach and change minds. He reminds us (via the work of modern psychologists) that our selves are made through significant encounter with others. And most importantly, he gives us a framework whereby these ''good reasons'' are restored to intellectual respectability, that we might decide for ourselves when we ought change our minds.

When should I change my mind? What can I believe and what must I doubt? In this new "philosophy of good reasons" Wayne C. Booth exposes five dogmas of modernism that have too often inhibited efforts to answer these questions. Modern dogmas teach that "you cannot reason about values" and that "the job of thought is to doubt whatever can be doubted," and they leave those who accept them crippled in their efforts to think and talk together about whatever concerns them most. They have willed upon us a "befouled rhetorical climate" in which people are driven to two self-destructive extremes-defenders of reason becoming confined to ever narrower notions of logical or experimental proof and defenders of "values" becoming more and more irresponsible in trying to defend the heart, the gut, or the gonads.

Booth traces the consequences of modernist assumptions through a wide range of inquiry and action: in politics, art, music, literature, and in personal efforts to find "identity" or a "self." In casting doubt on systematic doubt, the author finds that the dogmas are being questioned in almost every modern discipline. Suggesting that they be replaced with a rhetoric of "systematic assent," Booth discovers a vast, neglected reservoir of "good reasons"-many of them known to classical students of rhetoric, some still to be explored. These "good reasons" are here restored to intellectual respectability, suggesting the possibility of widespread new inquiry, in all fields, into the question, "When should I change my mind?"

Title:: Modern Dogma and the Rhetoric of Assent (Ward-Phillips Lectures in English Language and Literature ; V. 5)

Modern Dogma and the Rhetoric of Assent (Ward-Phillips Lectures in English Language and Literature ; V. 5)