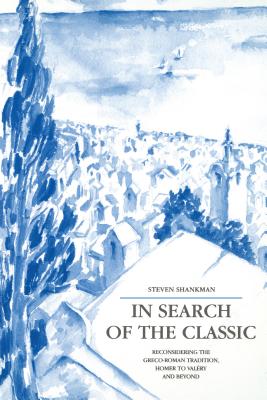 In Search of the Classic: Reconsidering the Greco-Roman Tradition, Homer to Valery and Beyond

The "classical," Steven Shankman argues, should not be confused with a particular historical period of Western antiquity, although it may owe its original articulation to the literary and philosophical explorations of ancient Greek authors. Shankman's book searches for and attempts to formulate the shape of the continuing presence--as embodied in particular literary works mainly from Western antiquity and the neoclassical and modern periods--of what the author calls a "classical" understanding of literature.

For Shankman, literature, defined from a classical perspective, is a coherent, compelling, and rationally defensible representation that resists being reduced either to the mere recording of material reality or to the bare exemplification of an abstract philosophical precept. He derives his definition largely from his reading of Greek literature from Homer through Plato, from the history of literary criticism, and from the Greco-Roman tradition in English, American, and French literature. Shankman reveals unsuspected yet convincing connections among authors of such widely disparate times and places. His idea of the "classic" that authorizes these connections is presented as normative, thus making possible the evaluation of literary works and, in turn, forthright discussion of what constitutes the "literary" as distinct from other kinds of discourse. Shankman's study runs counter to a strong tendency of contemporary criticism that argues precisely against any distinct category of the "literary." He offers a series of interpretations that cumulatively advance theoretical discussion by challenging scholars to rethink the critical paradigms of postmodernism.

At the center of the book is a discussion of the quintessentially classic Val ry poem Le Cimeti re marin and the classic qualities it shares with Pindar's third Pythian ode, from which Val ry derives the epigraph for his poem.

Title:: In Search of the Classic: Reconsidering the Greco-Roman Tradition, Homer to Valery and Beyond

In Search of the Classic: Reconsidering the Greco-Roman Tradition, Homer to Valery and Beyond