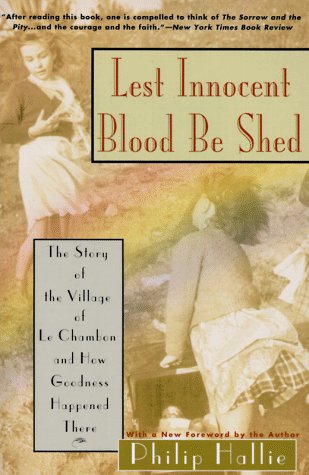 Lest Innocent Blood Be Shed: The Story of the Village of Le Chambon and How Goodness Happened There

During the darkest days of the Nazi occupation of France, a miracle of human compassion occurred in the midst of what seemed a twilight of irrevocable barbarism. In a small French Protestant village of Le Chambon, clergy (among them Andre Trocme, later the author of Jesus and the Nonviolent Revolution) and villagers organized, in front of the noses of the Vichy government and with a division of Nazi SS nearby, to save the lives of thousands of Jewish children and adults from the certain death of the camps. ''If, as has often been alleged, our old ethics do not work well, the alternatives work worse. But what is stunning about the people of Le Chambon is that the old ethics worked perfectly for them. Its citizens attained in virtue the perfection that in artistic creation or performance we recognize as glamorous-- magical, mystifying, romantic, alluring. The Chambonnais set new standards of excellence'' (Naomi Bliven,The New Yorker).

During the most terrible years of World War II, when inhumanity and political insanity held most of the world in their grip and the Nazi domination of Europe seemed irrevocable and unchallenged, a miraculous event took place in a small Protestant town in southern France called Le Chambon. There, quietly, peacefully, and in full view of the Vichy government and a nearby division of the Nazi SS, Le Chambon's villagers and their clergy organized to save thousands of Jewish children and adults from certain death.

Title:: Lest Innocent Blood Be Shed: The Story of the Village of Le Chambon and How Goodness Happened There

Lest Innocent Blood Be Shed: The Story of the Village of Le Chambon and How Goodness Happened There