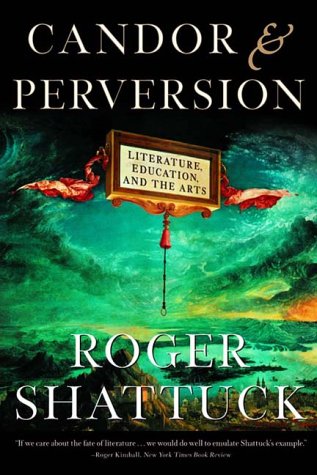 Candor and Perversion: Literature, Education, and the Arts

Distinguished teacher and literary critic Shattuck offers 39 short essays and addresses that nourish us with eloquent and bracing good sense. Opening with a bold encomium to E.D. Hirsch's Cultural Literacy and its insistence on a common core of factual knowledge as a prerequisite to literary experience, Shattuck goes on to offer a manifesto urging the priority of reading literature over theorizing about it (or prejudging or pre-classifying it), deploring the politicization of the teaching of literature in academia. He then plies his trade as critic, exploring Proust, exposing Foucault (''the Trojan Horse bearing in his belly'' the ethic of de Sade), enumerating the milestones on the path to ''radical scepticism'' (Kuhn, Berger, Saussure), and appreciatively narrating the development of modern arts. Harold Bloom's judgment on Shattuck is absolutely on target: ''an exemplary reader and a disturbing moralist.''

With incisive analysis, he elucidates the nature of intellectual craftsmanship, defends art's undeniable moral component, and, faced with an academic world shattered by theory, laments how extra-literary politics have grown increasingly dominant, now attempting to eliminate the very category of literature. Whether commenting on Foucault, Pulp Fiction, Georgia O'Keeffe, V.S. Naipaul, or the survival of a core tradition in the humanities, Shattuck presents a stirring synthesis of the principles and values by which we can live together as a nation finally at peace with its diversity. A Los Angeles Times Best Book of the Year and a TLS Notable Book of 1999.

Title:: Candor and Perversion: Literature, Education, and the Arts

Candor and Perversion: Literature, Education, and the Arts