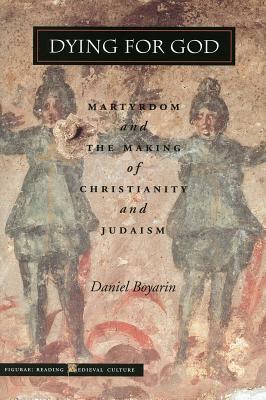 Dying for God: Martyrdom and the Making of Christianity and Judaism (Figurae: Reading Medieval Culture)

Not long ago, everyone knew that Judaism came before Christianity. More recently, scholars have begun to recognize that the historical picture is quite a bit more complicated than that. In the Jewish world of the first century, many sects competed for the name of the true Israel and the true interpreter of the Torah--the Talmud itself speaks of seventy--and the form of Judaism that was to be the seedbed of what eventually became the Christian Church was but one of these many sects. Scholars have come to realize that we can and need to speak of a twin birth of Christianity and Judaism, not a genealogy in which one is parent to the other. In this book, the author develops a revised understanding of the interactions between nascent Christianity and nascent Judaism in late antiquity, interpreting the two "new" religions as intensely and complexly intertwined throughout this period. Although the "officials" of the eventual winners in both communities--the Rabbis in Judaism and the orthodox leaders in Christianity--sought to deny it, until the end of late antiquity many people remained both Christians and Jews. This resulted, among other things, in much shared religious innovation that affected the respective orthodoxies as well. Dying for God aims to establish this model as a realistic one through close and comparative readings of contemporary Christian texts and Talmudic narratives that thematize the connections and differences between Christians and Jews as these emerged around the issue of martyrdom. The author argues that, in the end, the developing discourse of martyrology involved the circulation and exchange of cultural and religious innovations between the two communities as they moved toward sharper self-definition.

Title:: Dying for God: Martyrdom and the Making of Christianity and Judaism (Figurae: Reading Medieval Culture)

Dying for God: Martyrdom and the Making of Christianity and Judaism (Figurae: Reading Medieval Culture)