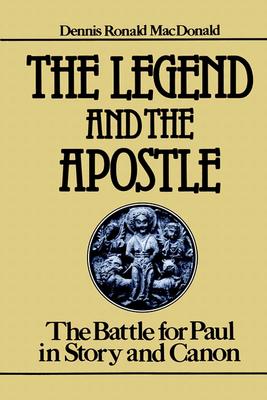 The Legend and the Apostle: The Battle for Paul in Story and Canon

The apostle Paul-- antifeminist conformist, or social radical? Combining New Testament studies with folkloristic methods to search for the true identity of Paul, the author sheds new light on the apocryphal "Acts of Paul" and the Pastoral Epistles (1 and 2 Timothy and Titus) of the canonical New Testament.

Dennis Ronald MacDonald focuses particularly on the legend of Thecla, the virgin and martyr who was converted by Paul and who, with his blessing, became a Christian teacher. Such utilization of women and an affirmation of celibacy and hostility toward the state were attitudes of Paul that were expressed in the legends, transmitted orally, then written into the "Acts of Paul." MacDonald argues that the author of the Pastoral Epistles knew about the legends and wrote under Paul's name to counteract them. The result: a complicated Paul, a still unresolved battle over his message.

With this book, the legends surrounding the apostle have been rescued from near oblivion and properly placed in the Pauline tradition. Formulated in the days of early Christianity and handed down through the centuries, they cast new light on Paul's views about the ordination of women, the forms of Christian community, and the meaning of the gospel for politics, society, and sexuality.

Title:: The Legend and the Apostle: The Battle for Paul in Story and Canon

The Legend and the Apostle: The Battle for Paul in Story and Canon