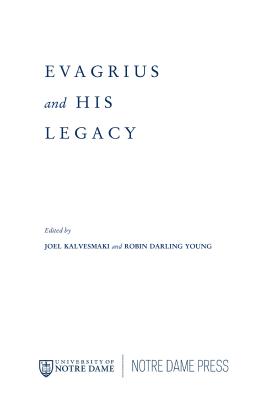 Evagrius and His Legacy

Evagrius of Pontus (ca. 345-399) was a Greek-speaking monastic thinker and Christian theologian whose works formed the basis for much later reflection on monastic practice and thought in the Christian Near East, in Byzantium, and in the Latin West. His innovative collections of short chapters meant for meditation, scriptural commentaries in the form of scholia, extended discourses, and letters were widely translated and copied. Condemned posthumously by two ecumenical councils as a heretic along with Origen and Didymus of Alexandria, he was revered among Christians to the east of the Byzantine Empire, in Syria and Armenia, while only some of his writings endured in the Latin and Greek churches. A student of the famed bishop-theologians Gregory of Nazianzus and Basil of Caesarea, Evagrius left the service of the urban church and settled in an Egyptian monastic compound. His teachers were veteran monks schooled in the tradition of Clement of Alexandria, Origen, and Anthony, and he enriched their legacy with the experience of the desert and with insight drawn from the entire Greek philosophical tradition, from Plato and Aristotle through Iamblichus. Evagrius and His Legacy brings together essays by eminent scholars who explore selected aspects of Evagrius's life and times and address his far-flung and controversial but long-lasting influence on Latin, Byzantine, and Syriac cultures in antiquity and the Middle Ages. Touching on points relevant to theology, philosophy, history, patristics, literary studies, and manuscript studies, Evagrius and His Legacy is also intended to catalyze further study of Evagrius within as large a context as possible.

Title:: Evagrius and His Legacy

Evagrius and His Legacy