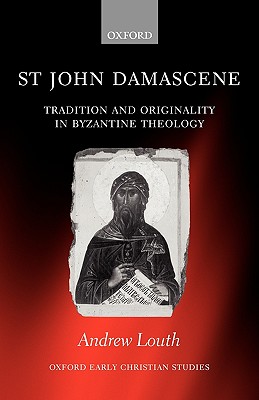 When a theologian sings, a special order of attention is due: his teaching has been transmuted into praise. St. John of Damascus (+ ca. 750), whose writings are often (if erroneously) marked as the close of the Patristic Age, gave us not only some of the greatest dogmatic treatises of all time but also some of the most magnificent hymnography: the Paschal canon, the funeral canon, the canons on the Transfiguration and the Dormition of the Mother of God. Strangely, scholarly attention to him in the English-speaking world has been almost non-existent, a lack that this important study grandly remedies. The eminent British patristic scholar Andrew Louth gives us here a thorough examination of the life and theological contribution of the Damascene, defining his methodology, summarizing his descriptions of Christian heresies (including Islam), central theological themes (the Trinity, Creation and Humankind, the Incarnation, the defense of icons), and providing a portrait of St. John as homilist and poet. St. John has often been accused of being a slavish imitator of the ''more original'' theological work of earlier Fathers, but Louth's epigraph to his book (attributed to a certain Zissimos Lorenzatos) -- ''Originality means to remain faithful to the originals'' -- and the massive scholarship that follows, prove the hollowness of the claim. We will risk a stock description, simply because in this case it is so true: Louth's work is a monument of Patristic scholarship.

John Damascene, a monk near Jerusalem in the early 700s, never set foot in the Byzantine Empire, yet he had a great influence on Byzantine theology. This book, the first to present an overall account of John's life and work, sets him in the context of the early synods of the Church that took place in the Palestinian monasteries during the first century of Arab rule.