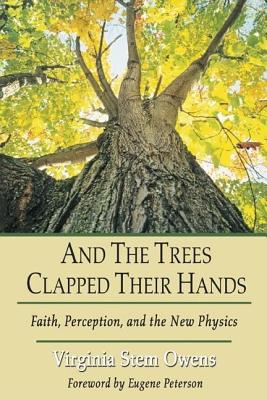 And the Trees Clap Their Hands: Faith, Perception, and the New Physics

The title is drawn from Isaiah 55 and the author's conviction that the imagery of Scripture calls for creation to participate in the praise of its maker. Following Newton and the rise of the empirical scientific method, nature has often been seen as mechanical, without sentience, following fateful rules. However, with the rise of expanding views of the cosmos from contemporary physics, there are increasingly more ways to identify creation bearing witness to incarnation. Here Owens offers a brief history and exploration of physics, interwoven with vivid and provocative perceptions of the physical world, challenging us to be alert, to be on the watch as it were for the beauty and glory of God ever present around us. As C.S. Lewis has said (quoted in the opening), ''We may ignore, but we can nowhere evade, the presence of God. The world is crowded with Him. He walks everywhere incognito. And the incognito is not always hard to penetrate. The real labour is to attend. In fact, to come awake. Still more, to remain awake.'' This book tunes our eyes to a sharper focus.

Ever since Newton, people - including Christians - have considered matter to be strictly mechanical, uninformed by any ""spirit"" and without sentience. Such a view, says Virginia Owens, ""demotes to mere metaphor"" all the natural imagery of Scripture that calls for creation to participate in the praise of its maker. Now, however, contemporary physical theory offers us an expanded view of the cosmos, which suggests that it is indeed sentient and informed with knowledge. For Christians, Virginia Owens argues in this book, the cosmos bears witness to the Incarnation itself. Owens offers a brief history and exploration of physics, interwoven with vivid and provocative perceptions of the physical world (reminiscent of the writings of Annie Dillard). The heavens really do proclaim the glory of God, Owens insists. ""The prophet's figure of trees clapping their hands is a living reality."" ""And the Trees Clap Their Hands"" will appeal to all general readers who are interested in the relationship between faith and our understanding of the physical world. ""We can no longer be satisfied with a 'religious' truth that fails to implicate matter - and vice versa....In the last few decades, many writers, not themselves scientists, have interested themselves in the transition from classical to modern physics and its consequences - few of them with such well-considered documentation and none with such abiding verve and personally persuasive emphasis as Virginia Owens."" - Owen Barfield Virginia Stem Owens has written over fifteen books that include three mysteries and nonfiction on a wide range of topics from media to metaphysics. Her memoir of her grandfather's last years won the Texas Institute of Letters prize for best nonfiction book in 1990. Living Next Door to the Death House, written with her husband, David, takes readers inside the prison culture that pervades her hometown, Huntsville, Texas. She is on the editorial board of Books & Culture. She also served for seven years as Director of the Milton Center, an institute dedicated to fostering excellence in writing by Christians.

Title:: And the Trees Clap Their Hands: Faith, Perception, and the New Physics

And the Trees Clap Their Hands: Faith, Perception, and the New Physics