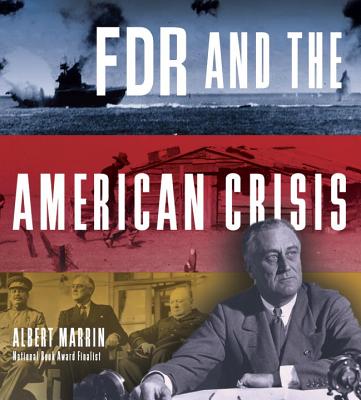 FDR and the American Crisis

The definitive biography of president Franklin Delano Roosevelt for young adult readers, from National Book Award finalist Albert Marrin, is a must-have for anyone searching for President's Day reading.

Brought up in a privileged family, Franklin Delano Roosevelt had every opportunity in front of him. As a young man, he found a path in politics and quickly began to move into the public eye. That ascent seemed impossible when he contracted polio and lost the use of his legs. But with a will of steel he fought the disease--and public perception of his disability--to become president of the United States of America. FDR used that same will to guide his country through a crippling depression and a horrendous world war. He understood Adolf Hitler, and what it would take to stop him, before almost any other world leader did. But to accomplish his greater goals, he made difficult choices that sometimes compromised the ideals of fairness and justice. FDR is one of America's most intriguing presidents, lionized by some and villainized by others. National Book Award finalist Albert Marrin explores the life of a fascinating, complex man, who was ultimately one of the greatest leaders our country has known.

Title:: FDR and the American Crisis

FDR and the American Crisis