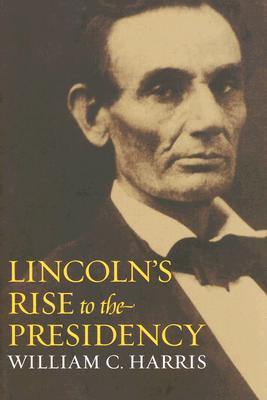 Lincoln's Rise to the Presidency

Adopting a new approach to an American icon, an award-winning scholar reexamines the life of Abraham Lincoln to demonstrate how his remarkable political acumen and leadership skills evolved during the intense partisan conflict in pre-Civil War Illinois. By describing Lincoln's rise from obscurity to the presidency, William Harris shows that Lincoln's road to political success was far from easy--and that his reaction to events wasn't always wise or his racial attitudes free of prejudice.

Although most scholars have labeled Lincoln a moderate, Harris reveals that he was by his own admission a conservative who revered the Founders and advocated "adherence to the old and tried." By emphasizing the conservative bent that guided Lincoln's political evolution-his background as a Henry Clay Whig, his rural ties, his cautious nature, and the racial and political realities of central Illinois--Harris provides fresh insight into Lincoln's political ideas and activities and portrays him as morally opposed to slavery but fundamentally conservative in his political strategy against it. Interweaving aspects of Lincoln's life and character that were an integral part of his rise to prominence, Harris provides in-depth coverage of Lincoln's controversial term in Congress, his re-emergence as the leader of the antislavery coalition in Illinois, and his Senate campaign against Stephen A.Douglas. He particularly describes how Lincoln organized the antislavery coalition into the Republican Party while retaining the support of its diverse elements, and sheds new light on Lincoln's ongoing efforts to bring Know Nothing nativists into the coalition without alienating ethnic groups. He also provides new information and analysis regarding Lincoln's nomination and election to the presidency, the selection of his cabinet, and his important role as president-elect during the secession crisis of 1860-1861 Challenging prevailing views, Harris portrays Lincoln as increasingly driven not so much by his own ambitions as by his antislavery sentiments and his fear for the republic in the hands of Douglas Democrats, and he shows how the unique political skills Lincoln developed in Illinois shaped his wartime leadership abilities. By doing so, he opens a window on his political ideas and influences and offers a fresh understanding of this complex figure.

Title:: Lincoln's Rise to the Presidency

Lincoln's Rise to the Presidency