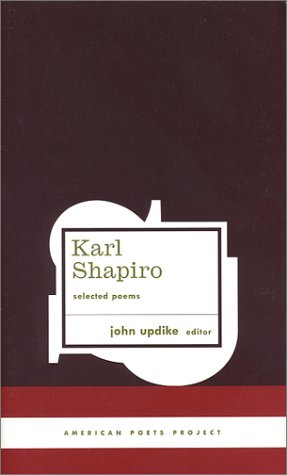 In this new selection of poems by Karl Shapiro, master literary craftsman John Updike provides a long-overdue reassessment of the Pulitzer Prize-winning poet who first rose to prominence with his poems about war.

Updike's great personal respect and affection for Shapiro's work resonate throughout the essay he wrote to introduce the volume: "Karl Shapiro's tone is breezy, surly, rapturous as the mood rapidly shifts. The last lines often stub our toes and invite us to reread. The concreteness can seem defiant. . . . His feet planted on the substantive, he could be modest and casual but also bold, with the boldness of truth personally verified." In the poems he's assembled, Updike selected broadly from the entire span of Shapiro's writing life, and his introduction establishes an enduring place in American literature for the poet whose pungency and vast range of subjects have helped define American poetry of the postwar period. About the American Poets Project
Elegantly designed in compact editions, printed on acid-free paper, and textually authoritative, the American Poets Project makes available the full range of the American poetic accomplishment, selected and introduced by today's most discerning poets and critics.