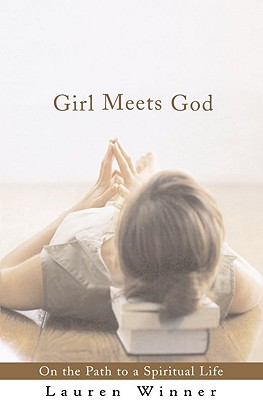 Girl Meets God : On the Path to a Spiritual Life

Twenty-something Lauren Winner -- a former Orthodox Jew turned Episcopalian -- offers a conversion tale worth the read. A doctoral candidate in the history of American religion, Winner is funny, candid, well-educated and curiously wise at once. Her style moves somewhere Between Anne Lamott and Frederica Matthews-Green, making for (as one reviewer puts it) an ''addictive readability'' -- without losing any credibility as to the nature and struggle of her journey. Like most converts, Winner initially rides the pendulum of extremes, trading in her Jewish prayer books for the Book of Common Prayer, but (thank God) she can't escape or divorce her Judaism as easily as she might have thought. This tension becomes the ground in which she continues her work of salvation, drawing from the wells of Christian spirituality (you'll find everything from Cyril of Alexandria to Billy Graham, Sven Birkerts, Jane Austen and Dietrich Bonhoeffer) while recgnizing the invaluable sustenance of her Jewish upbringing. With characteristic charm, Winner expresses the paradox best: ''When I hear Anglicans talk about spiritual formation, I remember the finger paint and the honey and the fasting lessons, and then I am happy that I was formed at Congregation Beth Israel.'' Book in New condition, jacket shows slight fading.

Like most of us, Lauren Winner wants something to believe in. The child of a reform Jewish father and a lapsed Southern Baptist mother, she chose to become an Orthodox Jew. But as she faithfully observes the Sabbath rituals and studies Jewish laws, she finds herself increasingly drawn to Christianity. Taking a courageous step, she leaves behind what she loves and converts. Now the even harder part: How does one reinvent a religious self? How does one embrace the new without abandoning the old? How does a convert become spiritually whole.

In GIRL MEETS GOD, this appealingly honest young woman takes us through a year in her search for a religious identity. Despite her conversion, she finds that her world is still shaped by her Jewish experiences. Even as she rejoices in the holy days of the Christian calendar, she mourns the Jewish rituals she still holds dear. Attempting to reconcile the two sides of her religious self, Winner applies the lessons of Judaism to the teachings of the New Testament, hosts a Christian seder, and struggles to fit her Orthodox friends into her new religious life.

Ultimately she learns that faith takes practice and belief is an ongoing challenge. Like Anne Lamott's, Winner's journey to Christendom is bumpy, but it is the rocky path itself that makes her a perfect guide to exploring spirituality in today's complicated world. Her engaging approach to religion in the twenty-first century is illuminating, thought-provoking, and most certainly controversial.

Title:: Girl Meets God : On the Path to a Spiritual Life

Girl Meets God : On the Path to a Spiritual Life