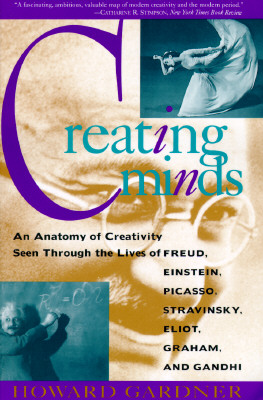 Creating Minds: An Anatomy of Creativity as Seen Through the Lives of Freud, Einstein, Picasso, Stravinsky, Eliot, Graham, and Gandhi

Howard Gardner changed the way we think about intelligence. In his classic work "Frames of Mind," he undermined the common notion that intelligence is a single capacity that every human being possesses to a greater or lesser extent. Now building on the framework he developed for understanding intelligence, Gardner gives us a path breaking view of creativity, along with riveting portraits of seven figures who each reinvented an area of human endeavor. Using as a point of departure his concept of seven "intelligences," ranging from musical intelligence to the intelligence involved in understanding oneself, Gardner examines seven extraordinary individuals--Sigmund Freud, Albert Einstein, Pablo Picasso, Igor Stravinsky, T.S. Eliot, Martha Graham, and Mahatma Gandhi--each an outstanding exemplar of one kind of intelligence. Understanding the nature of their disparate creative breakthroughs not only sheds light on their achievements but also helps to elucidate the "modern era"--the times that formed these creators and which they in turn helped to define. While focusing on the moment of each creator's most significant breakthrough, Gardner discovers patterns crucial to our understanding of the creative process. Not surprisingly, Gardner believes that a single variety of creativity is a myth. But he supplies evidence that certain personality configurations and needs characterize creative individuals in our time, and that numerous commonalities color the ways in which ideas are conceived, articulated, and disseminated to the public. He notes, for example, that it almost invariably takes ten years to make the initial creative breakthrough and another ten years for subsequent breakthroughs. Creative people feature unusual combinations of intelligence and personality, and Gardner delineates the indispensable role of the circumstances in which an individual works and the crucial reactions of the surrounding group of informed peers. He finds that an essential element of the creative process is the support of caring individuals who believe in the revolutionary ideas of the creators. And he documents the fact that extraordinary creativity almost always carries with it extraordinary costs in human terms.

Title:: Creating Minds: An Anatomy of Creativity as Seen Through the Lives of Freud, Einstein, Picasso, Stravinsky, Eliot, Graham, and Gandhi

Creating Minds: An Anatomy of Creativity as Seen Through the Lives of Freud, Einstein, Picasso, Stravinsky, Eliot, Graham, and Gandhi