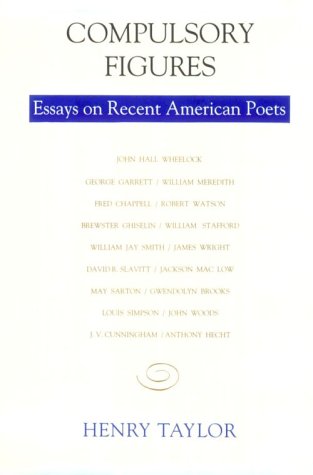 Although he is best known as a poet, Henry Taylor is also an astute critic, as the essays in this discerning collection demonstrate. In Compulsory Figures, Taylor writes about seventeen contemporary poets, much of whose work, he says, has been a part of his mental landscape since he himself began to write poetry. The pieces were written, and most of them published, over an extended period of time; as a whole, the collection reveals Taylor's profound respect for craftsmanship and for the distinct terms on which different poems must be taken. His concern is as much with the process of creating a poem as it is with the poem itself. Taylor's interests range from traditional verse to startling experiments with newer forms. Several of his subjects are among the best-known poets of the past twenty-five years; a few are better known as writers of prose than of poetry. Some have long been admired by only a select few, but Taylor's concern is less with reputation than with an individual poet's ways of engaging our attention and emotions.

Each essay is a meditation on a substantial portion of a poet's body of work--its evolution and its contribution to the art. Taylor writes about the contrasts between memories of a rural childhood and a lifetime of reading and learning found in Fred Chappell's impressive oeuvre and the merging of personal history with social and political history in the work of Gwendolyn Brooks. In May Sarton's poetry he finds a concern with both human and literary development, and he notes the profound wit, neoclassical attention to form, and generous erudition of David R. Slavitt's poems. He considers the skillful and serious experimental poetry of Jackson Mac Low and the deftness of form and tone in William Jay Smith's work. Others whose poetry he discusses are Anthony Hecht, J. V. Cunningham, Louis Simpson, John Woods, Robert Watson, Brewster Ghiselin, William Stafford, George Garrett, William Meredith, John Hall Wheelock, and James Wright.

These essays represent an informed and sensitive discussion of the state of recent American poetry. Throughout, Taylor's easygoing patience and clarity of style are at the service of the reader, the poems, and the poets.