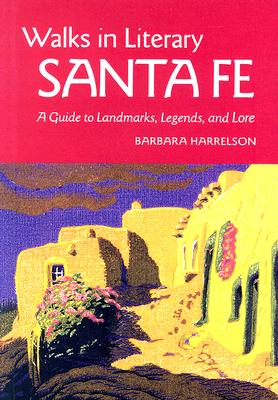 Walks In Literary Sante Fe: A Guide to Landmarks, Legends and Lore

A Guide to Landmarks,

In Walks in Literary Santa Fe, you will explore the storytelling traditions and cultural history of New Mexico and familiar landmarks. This guidebook reveals the stories of historical and legendary figures that have lived in and written about the Land of Enchantment and its storied capital city. An entertaining reference on regional literature and culture for residents and visitors alike, this volume includes a Southwest literary timeline, Southwest literature bibliography, a list of New Mexico's literary classics, plus contact details for local literary organizations, booksellers, and publishers, along with information on regional writers' retreats and conferences.

A sampling of authors discussed in the book include:

Barbara J. Harrelson developed a literary walking tour of Santa Fe, "Storytellers and the Southwest," soon after she moved to that New Mexico center of arts and culture. It is one of the few literary walking tours in the nation. Native to New Mexico, Harrelson is an independent writer whose work has appeared in the Newark Star-Ledger, the Santa Fe New Mexican, The Essential Guide to Santa Fe & Taos, and the Bloomsbury Review.

Title:: Walks In Literary Sante Fe: A Guide to Landmarks, Legends and Lore

Walks In Literary Sante Fe: A Guide to Landmarks, Legends and Lore