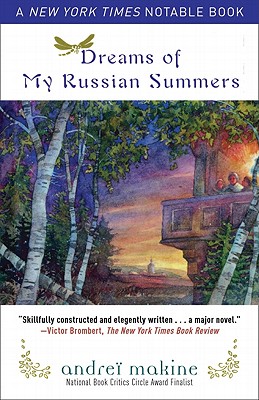 Dreams of My Russian Summers: A Novel

Every summer, young Andrei visits his grandmother, Charlotte Lemmonier, whom he loves dearly. In a dusty village overlooking the vast Russian steppes, she captivates her grandson and the other children of the village with wondrous tales--watching Proust play tennis in Neuilly, Tsar Nicholas II's visit to Paris, French president Felix Faure dying in the arms of his mistress. But from his mysterious grandmother, Andrei also learns of a Russia he has never known: a country of famine and misery, brutal injustice, and the hopeless chaos of war.

Enthralled, he weaves her stories into his own secret universe of memory and dream. She creates for him a vivid portrait of the France of her childhood, a distant Atlantis far more elegant, carefree, and stimulating than Russia in the 1970s and '80s. Her warm, artful memories of her homeland and of books captivate Andrei. Absorbed in this vision, he becomes an outsider in his own country, and eventually a restless traveler around Europe. Dreams of My Russian Summers is an epic full of passion and tenderness, pain and heartbreak, mesmerizing in every way.

Title:: Dreams of My Russian Summers: A Novel

Dreams of My Russian Summers: A Novel