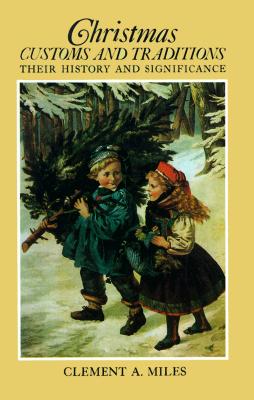 By: CLEMENT A. MILES

Did you know that the custom of Christmas card sending only became widespread in the late 1800s? That Christmas carols were first composed in the fourth century? That certain Christmas customs, many still practiced in the early twentieth century, may have derived from that darkest of religious rites, human sacrifice? That beyond Christmas Day, even beyond the twelve days of Christmas, there is a whole season of traditional celebrations with many interconnections.
Based on extensive research, this book is a comprehensive account of Christmas customs and traditions in both their pagan and Christian aspects. Tracing the pagan survivals in holiday practices associated with not just Christmas but also the entire holiday season from All Saints Day to Epiphany, the author illuminates such practices and manifestations as ceremonial feasting and drinking, carol singing, bull-baiting, divination by young women to discover the identities of their future husbands, men masquerading as women and women masquerading as men, the Knecht Ruprecht and the Tomte Gubbe, the Frauen, the Yule log, the Christmas tree, Christmas decorations and gifts, special Christmas cakes, and much more. There is also substantial coverage of Christmas poetry and song, Christmas in liturgy and popular devotion, Christmas drama, and the pre-Christian winter festivals.
With its insightful writing and wide scholarship, this book is an important contribution to the understanding of the most popular holiday in the Western world. It will appeal to those of all faiths, and will be enjoyed for browsing as well as for serious study.