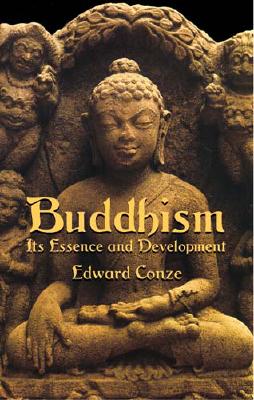 Buddhism: Its Essence and Development

"He has opened the stately grounds of scholarship to the public so that nothing of value and interest shall be missed. His readers are given an opportunity to understand something that has hitherto been only a mystery." -- The Times (London) Literary Supplement
"It would be hard to find a study of any religion which is at once so correct, scholarly, short, lucid, and readable." -- The Manchester Guardian
Based on a series of Oxford lectures delivered by a leading Buddhist scholar, this classic guide covers the entire range of Buddhist thought, including spirituality, doctrine, and basic assumptions.
An expert on the subject who converted to Buddhism in the course of his studies. Dr. Conze introduces Buddhism as both religion and philosophy, and discusses its common ground with other faiths throughout the world. He contrasts monastic and popular Buddhism and defines old and new schools of thought, discussing sects and their practices, moral wisdom, and literary history. Other subjects include the Yogacarins; the Tantra, or magical Buddhism; and developments in the faith beyond India.
The first comprehensive English-language book on Buddhism, this volume offers a concise approach to the complexities of Buddhist thought. A preface by a distinguished scholar of Oriental literature, Arthur Waley, appears in this edition.

Title:: Buddhism: Its Essence and Development

Buddhism: Its Essence and Development