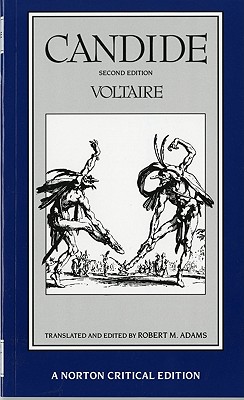 Moderate cover wear and creasing, firm binding, lots of underlining, highlighting, and annotations in the text.

The accompanying apparatus has been revised in accordance with recent biographical and critical materials. The Backgrounds and Criticism sections provide important essays that shed light on major critical issues relevant to Candide and to the intellectual climate of the period. In addition to the reports of five English visitors to Ferney, essays by Haydn Mason, Erich Auerbach, Ernst Cassirer, and Robert M. Adams are included. The final section of the edition, "The Climate of Controversy," summarizes the debate surrounding Voltaire s works and includes essays by Peter Gay, Raymond Naves, Gustave Lanson, and John Morley. Also included are a series of quotations about Voltaire by such prominent figures as Gustave Flaubert, Frederick the Great, and Stendhal, as well as the text of "Pangloss s Song," a ballad from the 1956 Candide-based operetta by Richard Wilbur."