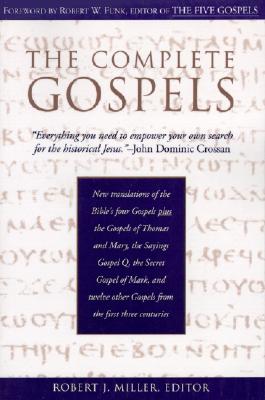 From the editors of the bestselling The Five Gospels, The Complete Gospels presents for the first time anywhere all twenty of the known gospels from the early Christian era, offering a fuller and more fascinating picture of early Christian origins than found in the four canonical gospels alone -- or in any other source. Each of these gospels records offers fresh glimpses into the world of Jesus and his followers, including:

Gospel of Thomas reveals that Jesus, contrary to the popular image of him as an apocalyptic preacher of damnation and salvation, was actually a wisdom teacher who taught about the true origins of humankind.Gospels of Mary suggests that women held prominent role in early church, and provides a startling look at what may have been the first attempts to supress their leadership.Sayings Gospels Q, the controversial reconstruction of the first gospel used by Jesus' original followers, contains only Jesus' sayings and none of the dramatic stories about his life later told in the New Testament gospels.Signs Gospel is almost entirely a catalog of Jesus' miracles, intended to demonstrate that he was the Jewish Messiah, the Anointed.Secret Book of James relates that immediately prior to his ascension, Jesus imparted a private revelation to James and Peter, which James presents here as a letter.Gospel of Peter contains what may have been the original passion narrative later adapted in the New Testament synoptic gospels' accounts.Four new pieces have been added to this third expanded edition: the three Jewish-Christian gospels and the Greek fragment of the Gospels of Thomas.Each gospel is translated into lively, contemporary English, recapturing the spirit of the original. Exciting both to read and to hear, this Scholars Version (SV) translation has -- as one reader put it -- "a vitality that jumps off the page." The editor and contributors to this volume are members of the Jesus Seminar founded by Robert W. Funk, based at the Westar Institute in Sonama, California.