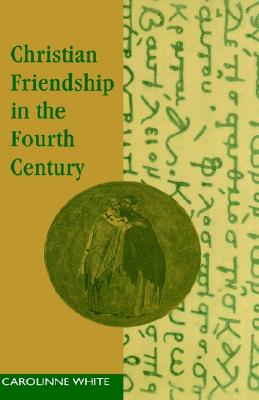 Christian Friendship in the Fourth Century

Drawing from her extensive research and translation of the early Church Fathers, Carolinne White has constructed an accessible, possibly seminal, study of friendship and its development in one of the most formative centuries of Christendom. Now available in paperback, this richly academic volume builds on the Classical understanding of friendship and its subsequent synthesis within the body of the early Church as a sacramental means toward salvation. By gathering the letters and theological writings of many of the great Christian writers of the fourth century -- such as Basil the Great, Gregory of Nazianzus, John Chrysostom, Jerome and Augustine -- Ms. White gleans valuable insight into the sustenance friendship yielded during a period of both heretical and pagan influence within the Church. Of notable interest are the chapters discussing the friendship between Chrysostom and the deaconess Olympias (one of the rare known examples of friendship between a man and woman) and the discussion of the practical arena monasticism provided in working out the daily particulars. Though we might be surprised how often these writers reveal their belief in the superiority of an exclusive, mutual love, our objections might be quieted upon reading Gregory's description of his friendship with Basil: ''We had all things in common and a single soul, as it were, bound together our two distinct bodies. But above all it was God, of course, and a mutual desire for higher things, that drew us to each other. As a result we reached such a pitch of confidence that we revealed the depths of our hearts, becoming ever more united in our yearning.''

This study presents the evidence, derived from letters and theological works, for theories of Christian friendship as they were developed by the leading fourth-century Church Fathers, both in East and West. The author attempts to find out how consistent and positive is the picture of friendship between Christians at the time, and considers friendship in the context of the relation between pagan theory and Christian ideas. All of the writers considered had a profound influence on later ages as well as on their own period.

Christian Friendship in the Fourth Century