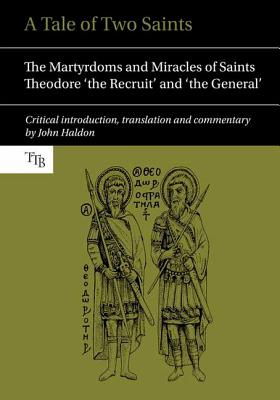 A Tale of Two Saints: The Martyrdoms and Miracles of Saints Theodore 'the Recruit' and 'the General' (Translated Texts for Byzantinists LUP)

Hagiographical writing, including the Lives of saints and martyrs and collections of their miracles, were one of the most popular, perhaps the most popular from of literature accessible to ordinary people in the medieval world. St. Theodore 'the Recruit' was one of the best-known of the so-called 'military saints' or 'soldier saints', particularly in the medieval eastern Roman, or Byzantine, and the eastern Christian world, where churches dedicated to him were to be found in towns, cities and in the countryside. While the cult of St. Theodore has been studied in the context of hagiographical writing and from the perspective of his representation in medieval art, this is the first translation into a modern language of any of the Greek texts connected with St Theodore. Ranging in date from the fifth to the eleventh century CE, five accounts of the martyrdom of the saint together with two sets of miracles have been selected, texts that testify to the growth and to the evolution of the martyrdoms and miracle collections associated with him. St Theodore 'the Recruit' had a senior partner, St Theodore 'the General' who first appears in the ninth century and reflects the tastes and demands of middle Byzantine elite society.
With a detailed introduction that examines the structure of the texts and their historical development, this volume also situates them in the context of recent archaeological work at Roman Euchaita, the centre of the cult in Anatolia.

Title:: A Tale of Two Saints: The Martyrdoms and Miracles of Saints Theodore 'the Recruit' and 'the General' (Translated Texts for Byzantinists LUP)

A Tale of Two Saints: The Martyrdoms and Miracles of Saints Theodore 'the Recruit' and 'the General' (Translated Texts for Byzantinists LUP)