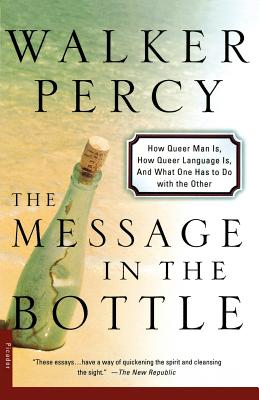 The Message in the Bottle : How Queer Man Is, How Queer Language Is, and What One Has to Do With the Other

Walker Percy's first collection of non-fiction-written before and during the early years of his career as a novelist-The Message in the Bottle includes fifteen essays culled from a variety of little known magazines. The opening essay begins with the question, 'Why does man feel so sad in the twentieth century?' Percy answers by considering the day Helen Keller discovered language; and in light of Helen's revelation he makes a bold claim: 'Man became man by breaking into the daylight of language-whether by good fortune or bad fortune, whether by pure chance, the spark jumping the gap because the gap was narrow enough, or by the touch of God, it is not for me to say here.' What Percy does say here, and in each of the subsequent essays, involves man's struggle for personhood, the mysterious 'errors' of wrong metaphors ('which is the very condition of our knowing anything at all'), the quasi-prophetic function of the novelist, language as an act of symbolization, and various theories on the relationship between symbol, consciousness, existentialism, and need. Trained as a doctor, Percy's prose can gravitate toward the technical, but his talent for taking himself lightly and his ability to sum up an entire essay in a single, pithy phrase not only saves him from the philosophical trash bin but establishes him as an important literary thinker. 272 pp.

In Message in the Bottle, Walker Percy offers insights on such varied yet interconnected subjects as symbolic reasoning, the origins of mankind, Helen Keller, Semioticism, and the incredible Delta Factor. Confronting difficult philosophical questions with a novelist's eye, Percy rewards us again and again with his keen insights into the way that language possesses all of us.

Title:: The Message in the Bottle : How Queer Man Is, How Queer Language Is, and What One Has to Do With the Other

The Message in the Bottle : How Queer Man Is, How Queer Language Is, and What One Has to Do With the Other