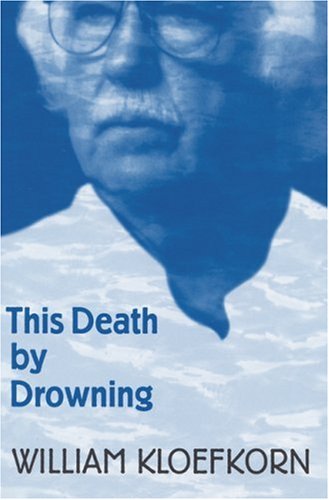 This Death by Drowning

The first volume in William Kloefkorn's four-part memoir which, when completed, will cover the four elements: water, fire, earth, and air. This Death by Drowning is a memoir with a difference--an artfully assembled collection of reminiscences, each having something to do with water. The book's epigraph, from Norman Maclean's A River Runs Through It, proclaims, "I am haunted by waters." So--and in most rewarding ways--is William Kloefkorn. The first chapter recalls the time when, at age six, the author "came within one gulp of drowning" in a Kansas cow-pasture pond, only to be saved by his father. A later chapter recounts Kloefkorn's younger brother's near death by drowning a few years later; still another envisions the cycle of drought and torrential rains on his grandparents' Kansas farm. There are fanciful memories of the Loup and other Nebraska rivers, interlaced with Mark Twain's renderings of the Mississippi and John Neihardt's poetic descriptions of the Missouri. And there are stories of more recent times--a winter spent in a cabin on the Platte River, and an often amusing Caribbean cruise that Kloefkorn took with his wife. Throughout, Kloefkorn takes his memories for a walk, following each recollection into unexpected, fruitful byways. Along the way he pauses at larger themes--of nature, death, family, and renewal--that gradually gather irresistible force and authority.

Title:: This Death by Drowning

This Death by Drowning