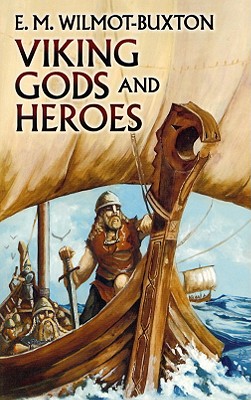 Viking Gods and Heroes (Dover Storybooks for Children) (Vol i)

This captivating collection of stories handed down centuries ago from the hardy people of the Far North tells of handsome gods, lovely goddesses, giants, and dwarfs who lived in a land dominated by fire and ice. Twenty-five astonishing tales for young readers recall the dramatic creation of earth, sea, and sky and the chilling struggles between titans, trolls, and mighty heroes.
Here are enticing narratives of gifts from the Queen of the Sky and a fortress built by a giant, along with thrilling accounts of a magic sword, Thor's mighty hammer, a golden treasure that has been cursed, and the slaying of a dreaded dragon. Offering hours of enchanted reading, these exciting exploits of legendary Nordic folk figures will delight anyone captivated by ancient myths and legends.

Viking Gods and Heroes (Dover Storybooks for Children) (Vol i)