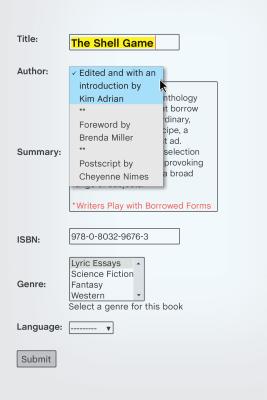 Within the recent explosion of creative nonfiction, a new type of form is quietly emerging, what Brenda Miller calls "hermit crab essays." The Shell Game is an anthology of these intriguing essays that borrow their structures from ordinary, everyday sources: a recipe, a crossword puzzle, a Craig's List ad. Like their zoological namesake, these essays do not simply wear their borrowed "shells" but inhabit them so perfectly that the borrowed structures are wholly integral rather than contrived, both shaping the work and illuminating and exemplifying its subject.

The Shell Game contains a carefully chosen selection of beautifully written, thought-provoking hybrid essays tackling a broad range of subjects, including the secrets of the human genome, the intractable pain of growing up black in America, and the gorgeous glow residing at the edges of the autism spectrum. Surprising, delightful, and lyric, these essays are destined to become classics of this new and increasingly popular hybrid form.