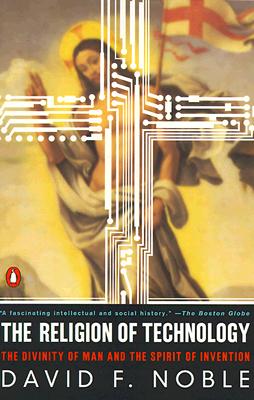 The Religion of Technology: The Divinity of Man and the Spirit of Invention

Are religion and science really at war with one another? Not according to David F. Noble, who argues that the flourishing of both religion and technology today is nothing new but rather the continuation of a 1,000-year-old Western tradition.

The Religion of Technology demonstrates that modern man's enchantment with things technological was inspired by and grounded in religious expectations and the quest for transcendence and salvation. The two early impulses behind the urge to advance in science, he claims, are the conviction that apocalypse is imminent, and the belief that increasing human knowledge helps recover what was lost in Eden. Noble traces the history of these ideas by examining the imaginings of monks, explorers, magi, scientists, Freemasons, and engineers, from Sir Isaac Newton to Joseph Priestley to Wernher von Braun.

Noble suggests that the relationship between religion and technology has perhaps outlived its usefulness. Whereas it once aimed to promote human well-being, it has ultimately become a threat to our survival. Thus, with The Religion of Technology, Noble aims to redirect our efforts toward more worldly and humane ends.

Title:: The Religion of Technology: The Divinity of Man and the Spirit of Invention

The Religion of Technology: The Divinity of Man and the Spirit of Invention