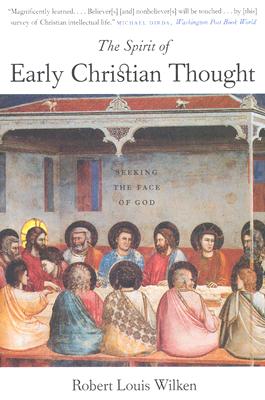 The Spirit of Early Christian Thought: Seeking the Face of God

Robert Wilken is one of our finest contemporary writers on early Christianity, one who can communicate with a general readership without condescension (the real test of genuine scholarship). He began this book intending to write a history of early Christian apologetics but found in the process that early Christian thought was too large and unique a phenomenon to be limited to a retelling of its responses to Greco-Roman criticisms. The result is this remarkably vivid description of how Christians during the patristic age went about ''seeking the face of God.'' Not surprisingly, the chief avenues trodden by both the great Fathers and average believers were worship, sacraments and the Scriptures; but Wilken brings a contagious immediacy and excitement to his descriptions of these. We stand in assembly before the eucharist as described by Justin Martyr; we see the history of Israel brought into Christian terms through Clement of Alexandria's Stromateis; we grasp an emerging ''rule'' of interpretation in Irenaeus' Against Heresies; we ponder raw scriptural data with Hilary and Augustine as they form classical formulations of Trinitarian doctrine, and with Maximus Confessor as he locates in the Gethsemane narrative the vindication of his teaching of two wills in Christ. Brevity requires that we pass over similarly revealing encounters with Gregory of Nyssa, Basil the Great, Origen, John of Damascus and others. ''Love itself is a form of knowledge,'' Gregory the Great is quoted in the epilogue. Primarily through the Fathers' love of Scripture, we can affirm Wilken's own conclusion that ''like an inexhaustible spring, faithful and true, they irrigate the Christian imagination with the life-giving water flowing from the biblical and spiritual sources of the faith. They are still our teachers today.'' 400 pp.

In this eloquent introduction to early Christian thought, eminent religious historian Robert Louis Wilken examines the tradition that such figures as St. Augustine, Gregory of Nyssa, and others set in place. These early thinkers constructed a new intellectual and spiritual world, Wilken shows, and they can still be heard as living voices in the modern world.In chapters on topics including early Christian worship, Christian poetry and the spiritual life, the Trinity, Christ, the Bible, and icons, Wilken shows that the energy and vitality of early Christianity arose from within the life of the Church. While early Christian thinkers drew on the philosophical and rhetorical traditions of the ancient world, it was the versatile vocabulary of the Bible that loosened their tongues and minds and allowed them to construct the world anew, intellectually and spiritually. These thinkers were not seeking to invent a world of ideas, Wilken shows, but rather to win the hearts of men and women and to change their lives.
Early Christian thinkers set in place a foundation that has endured. Their writings are an irreplaceable inheritance, and Wilken shows that they can still be heard as living voices within contemporary culture.

Title:: The Spirit of Early Christian Thought: Seeking the Face of God

The Spirit of Early Christian Thought: Seeking the Face of God