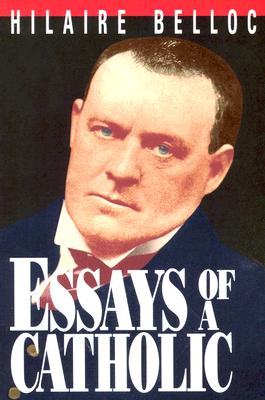 Essays of a Catholic

"One thing in this world is different from all other. It has a personality and a force. It is recognized and (when recognized) most violently loved or hated. It is the Catholic Church. Within that household, the human spirit has roof and hearth. Outside it, is the night." This statement from "A letter to Dean Inge" encapsules the spirit of Essays of a Catholic by the great Catholic historian and writer Hilaire Belloc. Essays of a Catholic, first issued in 1931, is a book as germinal and provocative in its thinking as it was when first published. Perhaps, more so, because we are witnesses to many of the evils Belloc predicted. Now we can see the working out of the destructive issues, trends and forces which he predicted. Why? What was the secret behind his perspicacity? Belloc realized that it is the Catholic Church which has inspired and formed our Western Civilization, and conversely, as the influence of that mighty institution gradually diminishes, and a society slowly ignores its teachings, slowly comes the nighttime of culture and civilization as we have known them. In their place, emerges the new paganism and with it, a new barbarism that will be more deep-seated and more difficult to overthrow. In "The New Paganism," "The Two Cultures of the West," "The Catholic Church and the Modern State," "On Usury," " The Schools," and other essays, Belloc sharpens our thinking to see the disastrous effects the decline of the influence of the Catholic Church has in our society. No reader will come away from these pages without serious misgivings for our future; unless, we, just like our ancestors did, embrace once more the solid and liberating truth of the Catholic Faith-the truth which sets men free.

Title:: Essays of a Catholic

Essays of a Catholic