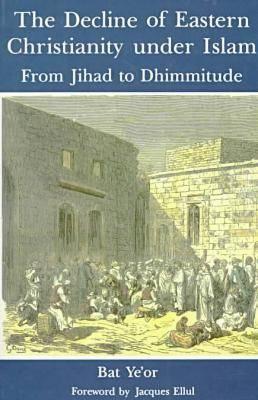 Imagine a holocaust extending in time from the seventh century to the twentieth, in geography from the Indus River valley in the east to the straits of Gibraltar in the west. Magnify that holocaust to subsume not just one civilization, but at least eight. Include in its machinery not just outright massacre, rape, and plunder, but also long intervals of demoralization, humiliation, and systematic division of the victim communities by institutionalized incentives to collaboration with the ruling power -- imagine all this and you will have a sense of the nightmare Bat Ye'or seeks to outline in this study. The fruit of twenty-five years of research, Ye'or's unflinching, systematic analysis of the condition of Eastern Christian and Jewish communities (dhimmis) under Islam shatters two prevailing myths: that both Arab and Ottoman Islamic societies maintained a relatively tolerant attitude towards the peoples it subjugated, and that Islamic civilization originated and bequeathed treasures of scientific and philosophical wisdom to an ignorant, benighted medieval West. Abundant primary sources are drawn together to show that the attitude of warfare (jihad) toward the non-Islamic world was not just another instance of religious persecution and cruelty common to many conquering powers (of which both Christianity and Judaism have abundant occasions of which to repent), but was an integral element of original Islamic ideology, a religious obligation, that called for either the conversion to Islam of non-Islamic peoples, or their eradication, with periodic truces observed for strategic ends. ''This is a great historical work on account of its scrupulous examination of the sources, the search for those sources, and the boldness in tackling a historical factor of prime importance too often neglected'' (Jacques Ellul, in the Introduction). The use which is made of this work is another matter. It would be the greatest of tragedies if it were used to fuel a continuing cycle of resentment and accusation, rather than as a tool for historical understanding -- while practicing the forgiveness which we are commanded to extend ''up to seventy times seven.''

In this study Bat Ye'or provides a lucid analysis of the dogma and strategies of jihad, offering a vast panorama of the history of Christians and Jews under the rule of Islam. This epic story sheds light on the areas of fusion, interdependence, and confrontation between Islam, Christianity, and Judaism.

Title:: The Decline of Eastern Christianity under Islam