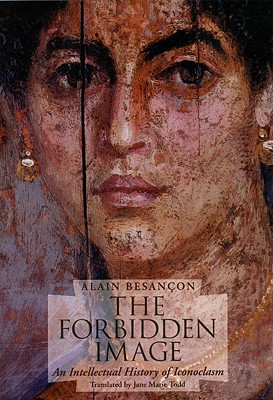 The Forbidden Image: An Intellectual History of Iconoclasm

Students of history know the pleasurable agony of the simple question that, like a hydra, grows more complicated the further it's pursued. Such is the story behind this book. Besancon's desire to trace the simple history of divine representation in European art gives way to a history of the motives driving philosophy, art, religion, politics and culture for over two millennia. Fortunately he's up for the Herculean labor, providing a rich and comprehensive understanding of iconoclasm (in its broadest sense) and its pervasive shaping power over the human mind. Most brilliantly he demonstrates this force even at work within the icon itself, how the positive articulation of church aesthetics in the East and West relies upon a good measure of unarticulated rejection. His argument builds to an ambitious nadir in the context that emerges for 20th century symbolic art and thought. With a scholar's grace Besancon reveals without exalting or defaming and creates a compelling illustration of how the swells and decays of artistic achievement are a function of prevailing, if transient theories governing the relationships between art, artists, God and society. The struggle to glimpse reality and to get it right remains constant.

Philosophers and theologians have long engaged in intense debate and introspection over the representation of the deity, its possibilities and its proscriptions. "The Forbidden Image" traces the dual strains of "iconophilia" and iconoclasm, the privileging and prohibition of religious images, over a span of two and a half millennia in the West.

Alain Besancon's work begins with a comprehensive examination of the status of the image in Greek, Judaic, Islamic, and Christian thought. The author then addresses arguments regarding the moral authority of the image in European Christianity from the medieval through the early modern periods. Besancon completes "The Forbidden Image" with an examination of how iconophilia and iconoclasm have been debated in the modern period.

"Even the reader who has heard something of the Byzantine quarrels about images and their theological background will be surprised by a learned and convincing interpretation of the works of Mondrian, Kandinsky, and Malevich in terms of religiously inspired iconoclasm. . . . This is an immensely rich and powerful masterpiece."--Leszek Kolakowski, "Times Literary Supplement"

Title:: The Forbidden Image: An Intellectual History of Iconoclasm

The Forbidden Image: An Intellectual History of Iconoclasm