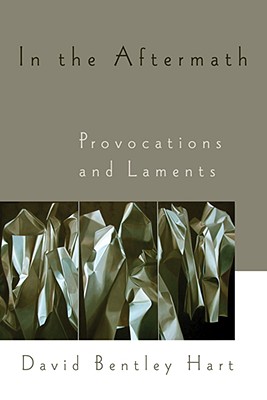 In the Aftermath: Provocations and Laments

'Here I want-at least, in part-to entertain,' writes David Bentley Hart in his introduction to In the Aftermath: Provocations and Laments . In accord with Hart's faculty for being at once erudite, profound, satirical, and just plain funny, these essays really are some kind of wonderful, no matter if you agree or take issue with the opinions he unabashedly puts forward. Example (from 'The Laughter of the Philosophers'): 'For the most part, the works of philosophers mirror the shapes of their lives.The leaden, caliginous bombast of Hegel's prose was a pure emanation of his grindingly pompous soul. The turgidity of Derrida's attempts at playfulness are little more than clinical specimens of his insufferable self-infatuation.' and so forth. Included are book reviews, newspaper columns, an interview, magazine articles, and a public address. With an intellectual passion formed by Eastern Orthodox theology, Hart addresses everything from euthanasia and stem cell research to the justification of war, tsunamis, and John Paul's pontificate. The majority of these essays appeared in First Things, but many reached the broader audiences of The Wall Street Journal and The New Criterion . Hart's prose is at once acrobatic and lyrically fluent. The best commendation of his work, however, comes from his own hand (in reference to SÃ¸ren Kierkegaard): 'He is one of that blessed and select company of modern philosophers whose writings can be read purely for the pleasure they afford.' 204 pp.

From the prolific, profound pen of David Bentley Hart comes this collection of essays, reviews, and columns published in popular journals and newspapers over the past few years, comprising observations on culture, religion, and society at large. In the Aftermath fully displays the virtuosic prose that readers have come to expect from Hart.

-Here I want -- at least in part -- to entertain. This is not to say that the pieces gathered here are not serious in their arguments; quite the contrary. . . . I mean only that, in these articles, I have given my natural inclinations towards satire and towards wantonly profligate turns of phrase far freer rein than academic writing permits. . . . I have, at any rate, attempted to include only pieces that strike me as having some intrinsic interest, both in form and in content.-
-- from the introduction

Title:: In the Aftermath: Provocations and Laments

In the Aftermath: Provocations and Laments