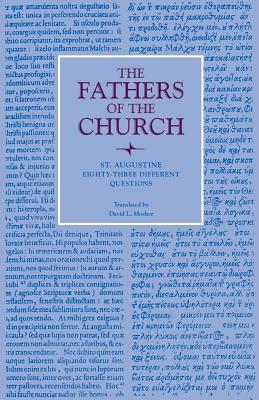 In the autumn of A.D. 388, St. Augustine returned from Italy to northern Africa. Here in his native Thagaste he assembled a monastic community. When the brethren found their leader Augustine in a rare moment of leisure, they had no misgivings about putting questions to him on a variety of topics which he answered from the store of his vast knowledge. These questions together with the answers were later collected and assembled in a random order (ractions ). The English translation presented here affords the reader a rare opportunity to glimpse some of the topics that interested members of a community that eventually gave the early Church four bishops: Alypius of Thagaste, Severus of Milevis, Profuturus of Citra, and Possidius of Calama. Even though St. Augustine intended no specific sequence in this collection, four broad categories in the question and answer literary form are discernible. One category serves as Christian apologetic, e.g., against Arian and Manichaean errors. The second presents Augustine in the role of exegete of selected passages from both the Old and New Testaments. The third and fourth categories, containing the greater number of questions and answers, show Augustine the philosopher and theologian, a person of towering intellectual stature in western Christianity and one of the important ""Founders of the Middle Ages."" Though formulated between the years A.D. 388 and 395/97 and presented from the viewpoint of Neoplatonists, many topics, e.g., the cause of evil, sin and freewill, still have great relevance for the modern reader.