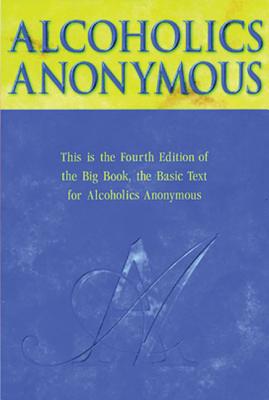 Alcoholics Anonymous: The Story of How Many Thousands of Men and Women Have Recovered from Alcoholism

Alcoholics Anonymous (also known as the Big Book in recovery circles) sets forth cornerstone concepts of recovery from alcoholism and tells the stories of men and women who have overcome the disease.

The fourth edition includes twenty-four new stories that provide contemporary sharing for newcomers seeking recovery from alcoholism in A.A. during the early years of the 21st century. Sixteen stories are retained from the third edition, including the "Pioneers of A.A." section, which helps the reader remain linked to A.A.'s historic roots, and shows how early members applied this simple but profound program that helps alcoholics get sober today. Approximately 21 million copies of the first three editions of "Alcoholics Anonymous" have been distributed. It is expected that the new fourth edition will play its part in passing on A.A.'s basic message of recovery. This fourth edition has been approved by the General Service Conference of Alcoholics Anonymous, in the hope that many more may be led toward recovery by reading its explanation of the A.A. program and its varied examples of personal experiences which demonstrate that the A.A. program works.

Title:: Alcoholics Anonymous: The Story of How Many Thousands of Men and Women Have Recovered from Alcoholism

Alcoholics Anonymous: The Story of How Many Thousands of Men and Women Have Recovered from Alcoholism